There is a lot of conflicting information out there when it comes to cleaning vintage cast iron, and in fact several methods for maintaining cast iron cookware in optimal shape. Can you use soap? Should you clean your vintage cast iron after every use?

In this post, I will answer these questions and more. I’ll also outline several surefire methods for cleaning even the gunkiest of cast iron skillets.

Finally, I’ll take you through the procedure that I use on my own cast iron, illustrating step by step how I clean and maintain this beautiful cookware.

What is the best way to clean an old cast iron?

The best way to clean vintage cast iron is by washing it with hot water and an abrasive while still warm. Rinse remaining food debris from the pan with water, using a brush if necessary, and then wipe your pan clean with a paper towel.

As you’ve probably already heard, using soap on old cast iron is a big no no, and that’s because even mild soaps will begin to break down the layer of seasoning that protects your pan. Of course, the problem, as we all know, is that cleaning things without dish soap can be tricky. 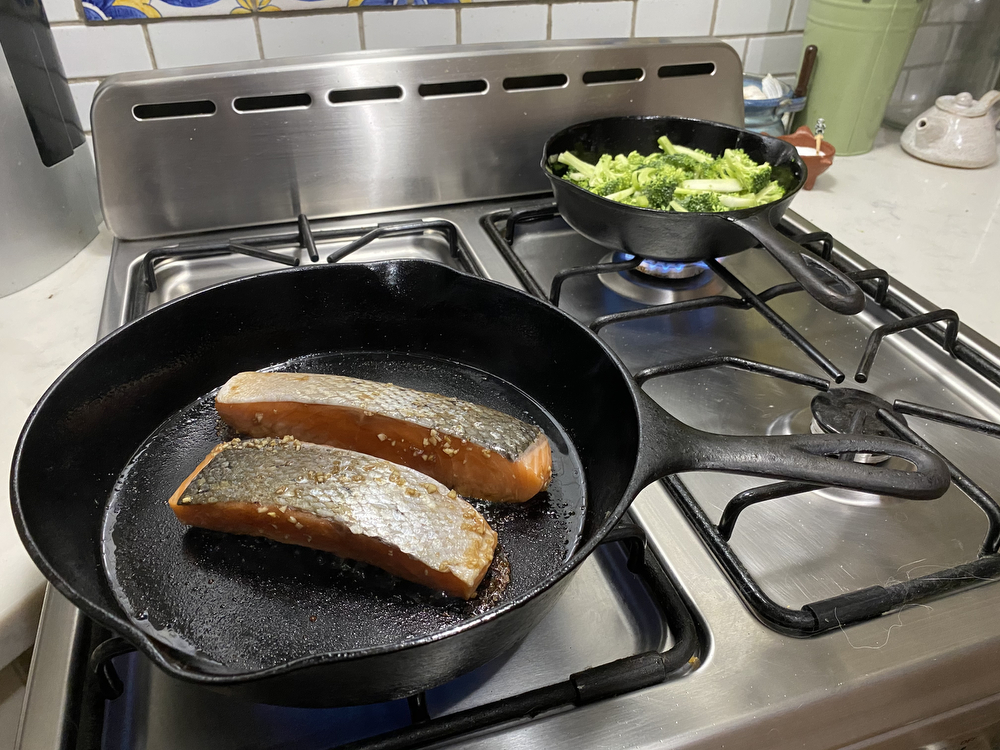 I like to do this with hot water and a mild abrasive brush, though sometimes I don’t even run my cast iron under water. If the cast iron isn’t too sticky, I’ll often simply wipe the pan down with some dry paper towel, before putting it away.

Should you clean cast iron after every use?

Yes, cast iron should be cleaned after every use to prevent accumulated food debris from becoming a fire hazard. But don’t use dish soap! Instead, you want to rinse your cast iron with hot water before wiping food debris and water away with a dry paper towel.

I realize that cleaning cast iron can be intimidating, or just plain annoying given the restrictions when it comes to soap and, of course, the weight. But cleaning your cast iron after each use doesn’t just ensure that your pans are protected. 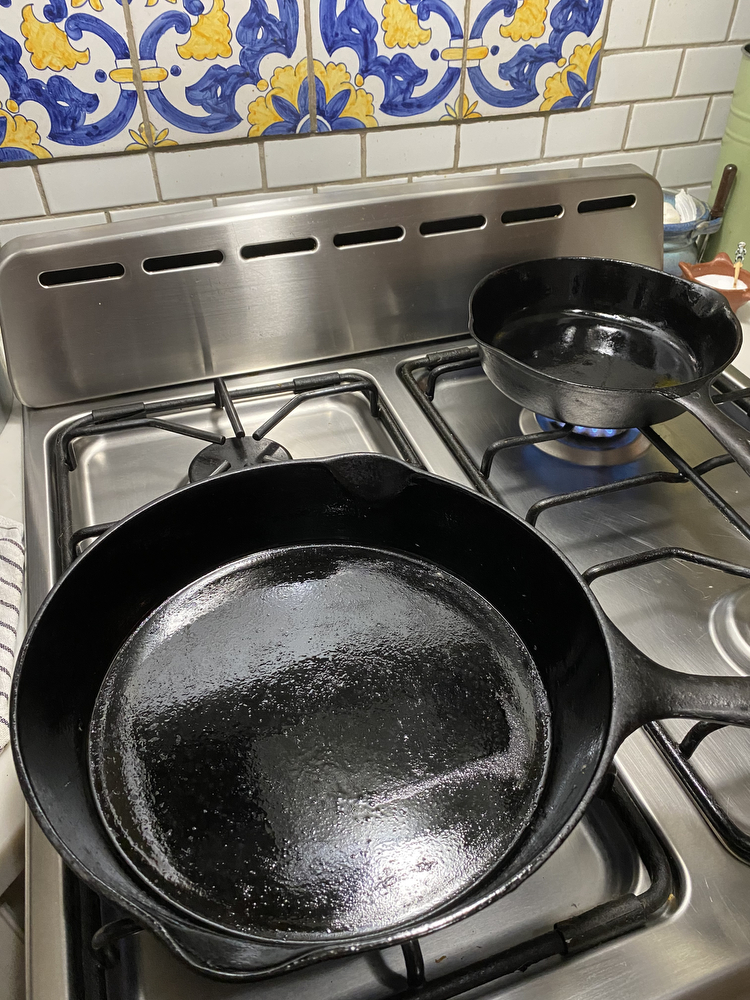 In fact, cleaning your cast iron regularly actually makes maintaining your pans easier in the long run, since you’re preventing food debris from hardening into tougher, more stubborn layers of carbon. Think of it this way - would you rather brush your teeth every day or get a super intense, painful and expensive deep cleaning at the dentist once every few years?

The fact is, if you maintain your cast iron properly, you won’t have to worry about cumbersome deep cleanings, restorations and re-seasonings.

Can you use steel wool on cast iron?

Using steel wool to clean cast iron is a bad idea, since it tends to strip the cast iron of its natural seasoning, in much the same way that soap is a bad idea. That said, you can and should use steel wool when restoring cast iron, as it is the best thing for tackling rust.

Steel wool is a fantastic but powerful tool, worthy of our respect. While it often gets the job done - removing food debris and gunk in a pinch - you can also easily ruin your cookware if you aren’t careful.

This will depend largely on what you’re cleaning and the gauge of steel wool you’ll be using. Again, don’t use steel wool to clean your cast iron after use, but if you’re restoring cast iron - meaning you want to strip all of the old food debris and oils from your pan before re-seasoning - steel wool is invaluable.

When restoring vintage cast iron, I like to begin with a fine or very fine steel wool, and then move down to a super fine steel wool to get a good polish.

Can you use dish soap on cast iron?

The standard rule of thumb is that no, you can’t use dish soap on cast iron. That said, there are some advocates that argue that a mild dish soap is alright so long as your cast iron is sufficiently seasoned.

Dish soap breaks down the oils in your seasoning, which not only affects the non-stick properties of the cast iron, but also exposes your cast iron to rust. This is the main reason why most of us never use dish soap when cleaning cast iron.

The truth is, while I recommend against it, using a mild dish soap isn’t the end of the world. If you really think it’s necessary - and don’t have the patience to wash your cast iron without it - then I would suggest adding a small amount of dish soap to your scrub brush. 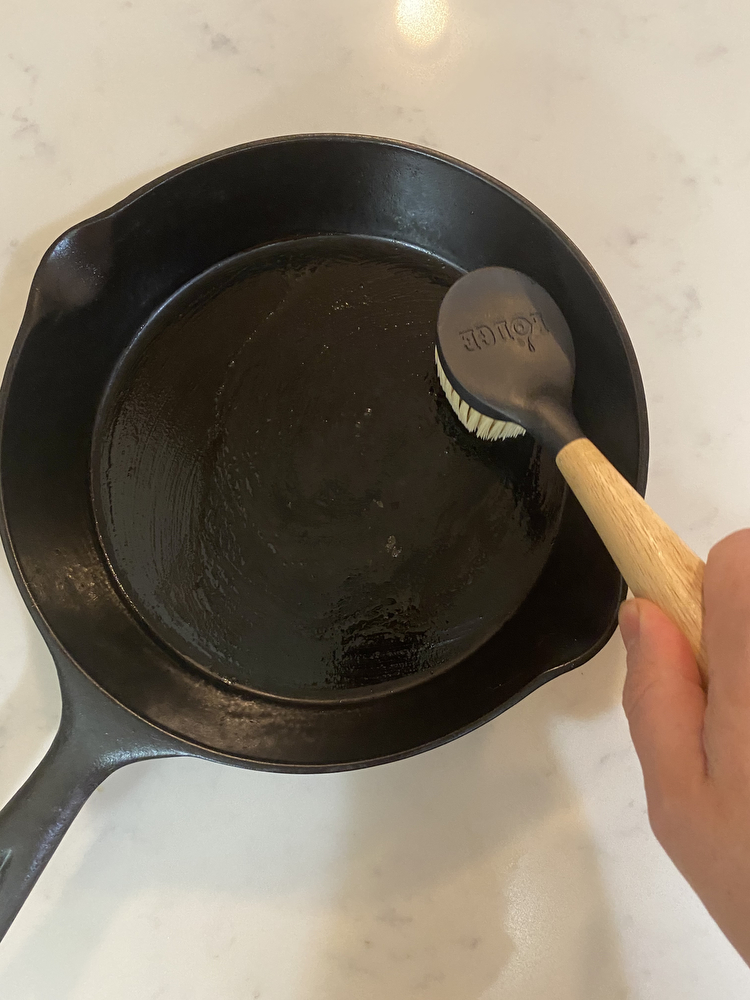 The critical thing here, however, is that if you do use dish soap on your cast iron, you will definitely want to dry the cast iron completely and then gently rub it down with a thin layer of neutral oil. More on this below.

Can you use vinegar to clean cast iron?

Vinegar is often used to remove rust from old cast iron, but it shouldn’t be used in regular cleaning. Soaking cast iron in a vinegar bath will break down rust, but it will also remove seasoning and will eventually eat away the original iron itself, ruining your pan.

In my opinion, using vinegar on cast iron is kind of a risky game. It does indeed work great on rust, but you’ll need to time your soak properly to avoid corroding the cast iron material itself.

I have an entire guide on restoring vintage cast iron, in which I advocate the use of steel wool when tackling rust. I stand by this preference of manually scrubbing with steel wool over vinegar when dealing with rust, but understand that this involves a bit more elbow grease. 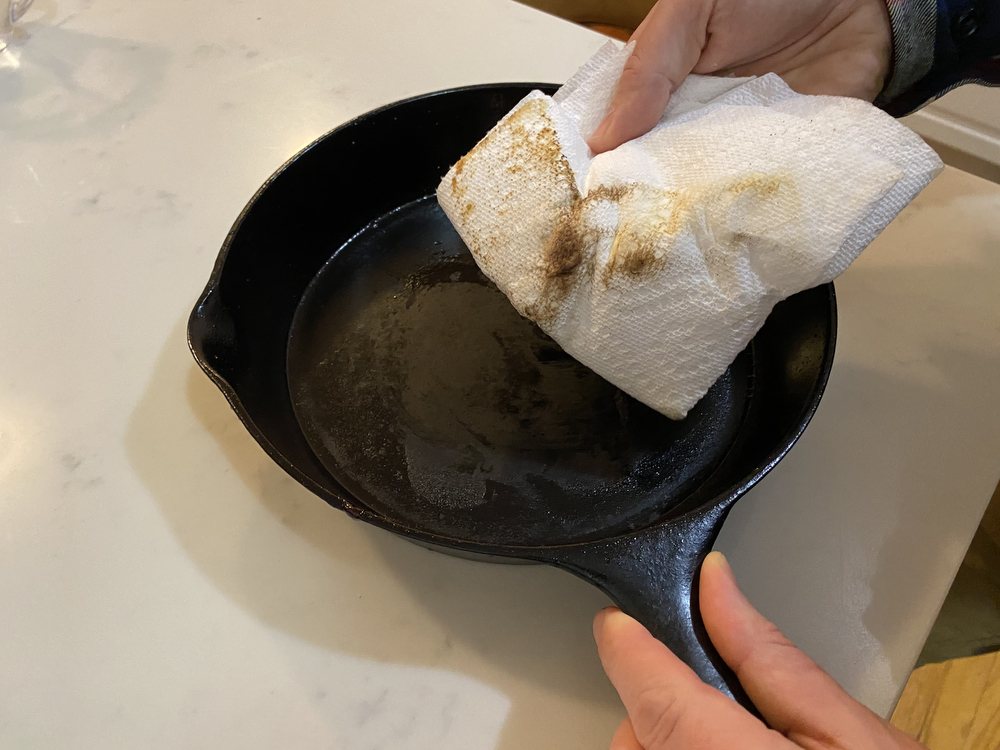 If you’re in a pinch, you can soak your pan in a vinegar bath, but please, please don’t leave it in there too long!

Can you ruin a cast iron pan?

Cast iron skillets are incredibly durable, one of the reasons why there is so much vintage cast iron still in circulation. That said, it is possible to ruin a cast iron pan, either by warping, cracking or chipping your cast iron through improper use.

Like I said, warping, cracking and chipping are the main problems that might render your cast iron useless. You can get warps and cracks through improper heating - basically, heating or cooling yoru cast iron too quickly, while chips are usually the result of a physical impact (think, dropping your cast iron on the floor).

But with respect to cleaning your cast iron, it’s hard to ruin it per se. Even using a ton of dish soap won’t necessarily ruin your cast iron forever; it will simply strip the piece of its natural seasoning, which can always be re-applied.

While I expand on each of these steps below, here are a few easy to follow steps, as well as a list of everything you’ll need to maintain your cast iron. Luckily, these are things that most of us already have in our kitchen.

You will need the following materials:

Here are the five easy steps: 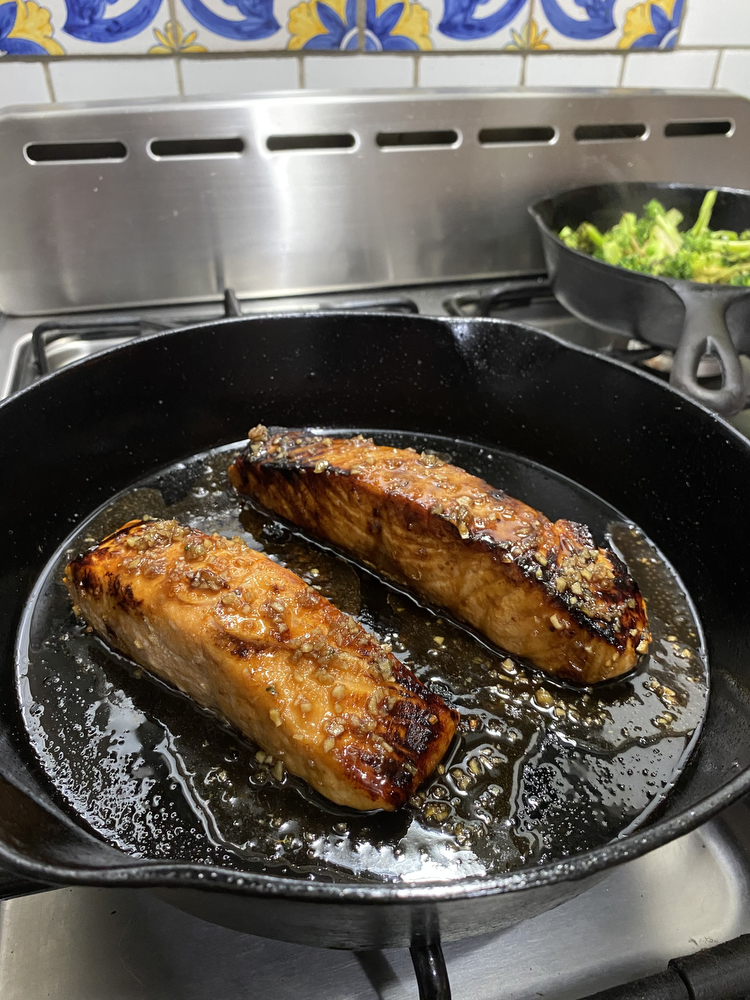 To demonstrate the way I clean my cast iron, I first decided to cook what I consider to be a pretty messy dish - garlic and miso-glazed salmon. Although delicious, preparing this meal involves using my cast iron on both the stovetop and in the oven.

Since the glaze for this dish has both soy sauce and honey in it, as well as tons of minced garlic and ginger, the surface of the pan tends to get real nasty, real quick. The garlic crisps up and sticks to the skillet, the soy sauce reduces, and everything gets quite messy. 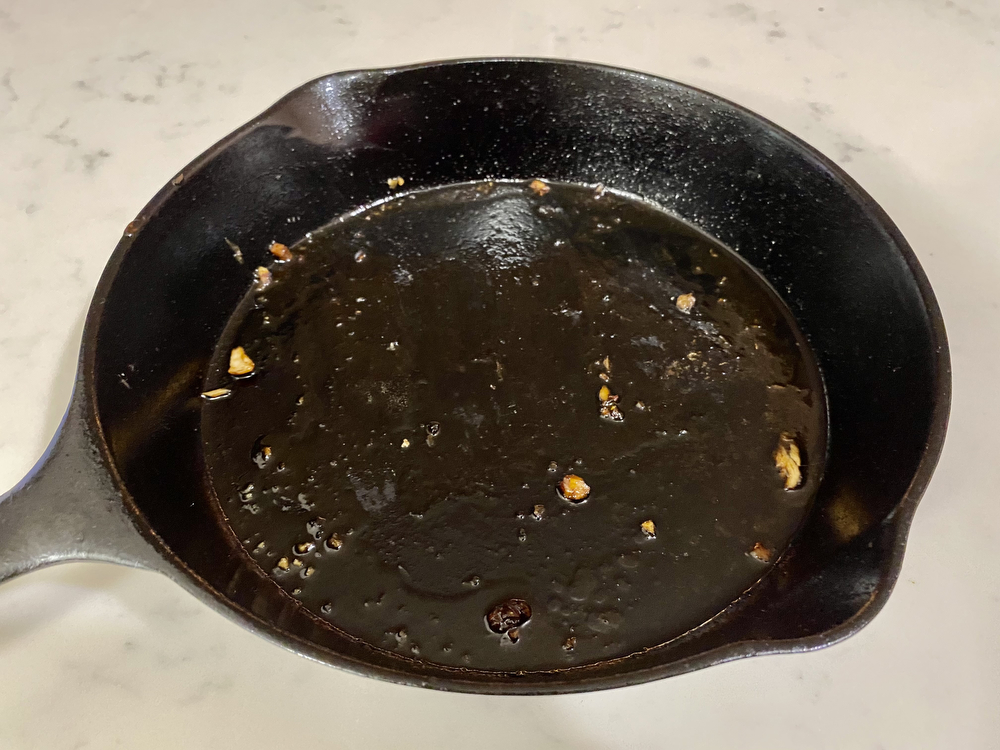 STEP ONE: The first thing that I will do with this pan is run it under very hot water to try and break some of these crispies up, and also in order to rinse off some of the oil.

STEP TWO: If you find at this stage that water really isn’t doing much, or that there is simply too much food stuck to the bottom of the pan, you can use a lightly abrasive sponge or brush, like I use in the following photos.

I would also avoid using dish soap at this stage. If you are really struggling, it won’t be the end of the world (see above), but I still highly recommend against it. Instead, I would recommend investing in a nice brush, something that gives a little additional leverage over a traditional sponge. This is the brush that I’m using below. 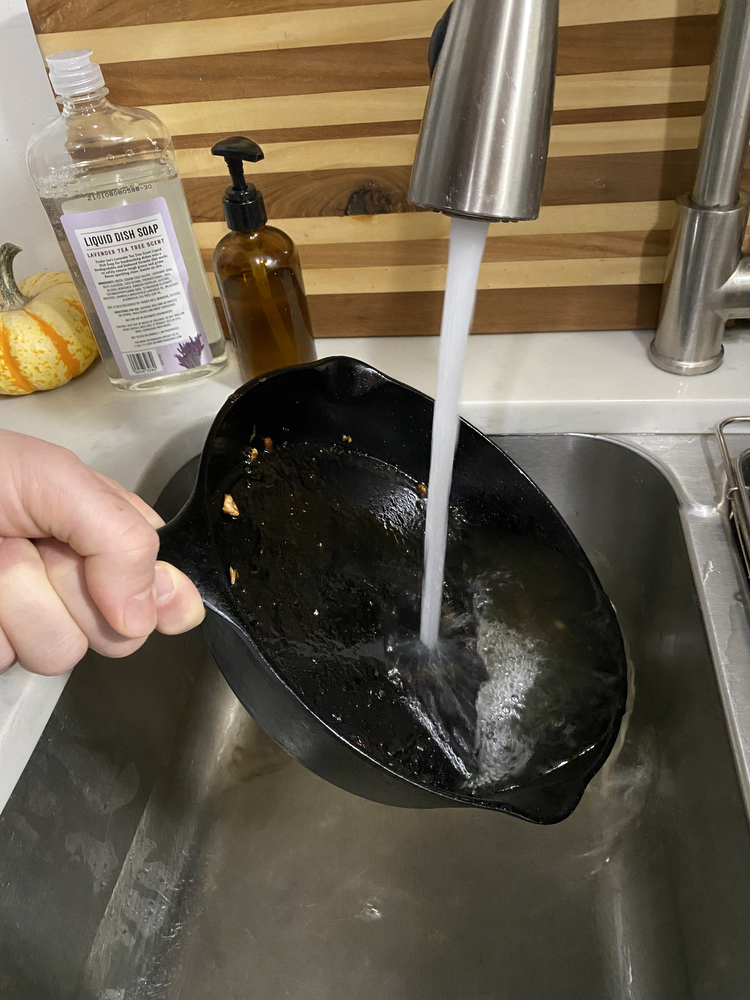 There are actually tons of products on the market cast iron these days, and some of them are pretty cool, like the Ringer, marketed as the “original stainless steel cast iron cleaner.” Just imagine a dish cloth made from medieval chainmail armor and you’ve got it.

Lodge also makes a very cool scrubbing brush that you can use with a standard sponge,  available here. Just make sure that your sponge doesn’t have too much residual dish soap in it.

Of course, there is also no real need to get fancy, and you can always use simple scouring pads. The important thing is that you use whatever feels most comfortable, since this will encourage cleaning consistency. 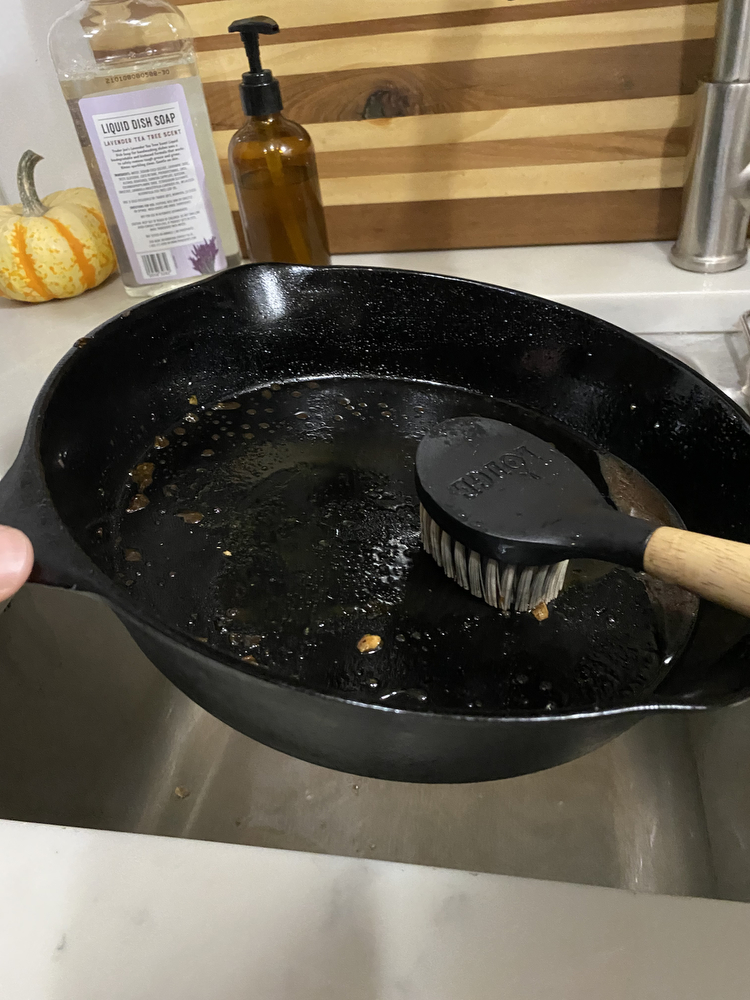 The only thing that deserves repeating here is to never use dish soap! Dish soap will ruin the seasoning on your cast iron - essentially stripping it of the oils that coat and protect your skillet - meaning you’ll have to completely re-season.

STEP THREE: Once you’ve gotten all of the food debris clear, you’ll want to rinse your pan once more - again with hot water.

STEP FOUR:  When you’re finished rinsing your pan, wipe it dry with some paper towel. I suppose you could use a dish towel for this too, but it’s likely that your cast iron will still have at least some oil left on it, which you won’t want soiling your new dish towels. 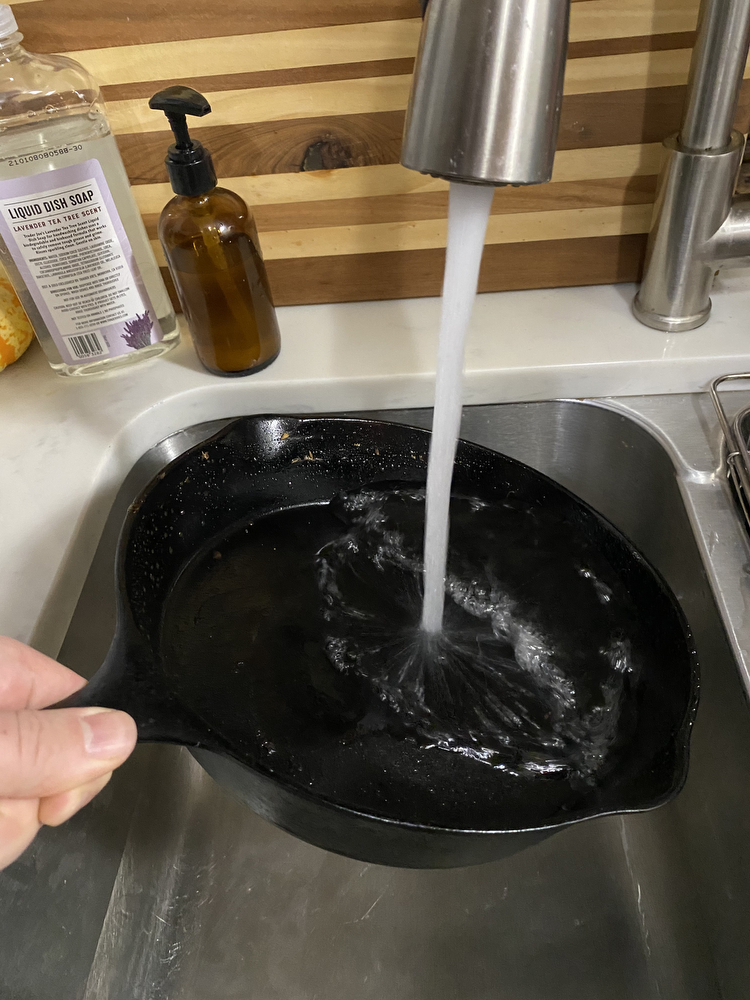 It’s important to gently pat your cast iron skillet until it is completely dry, making sure to soak up any water left in your pan. Look out for any grooves on the base of your pan, and the interior corners where the cooking surface meets the skillet walls. These hard to get areas tend to collect water, which you’ll want to soak up.

Water is a mortal enemy of cast iron, since if left to sit, it will cause rusting almost immediately. This will be even worse if your pan isn’t properly seasoned, and something that you absolutely want to avoid.

STEP FIVE: After you’ve wiped your pan dry, you may want to add a little bit of oil, depending on how things are looking. This is kind of cheating, but I like this trick a lot because it keeps my cast iron well protected when not in use. 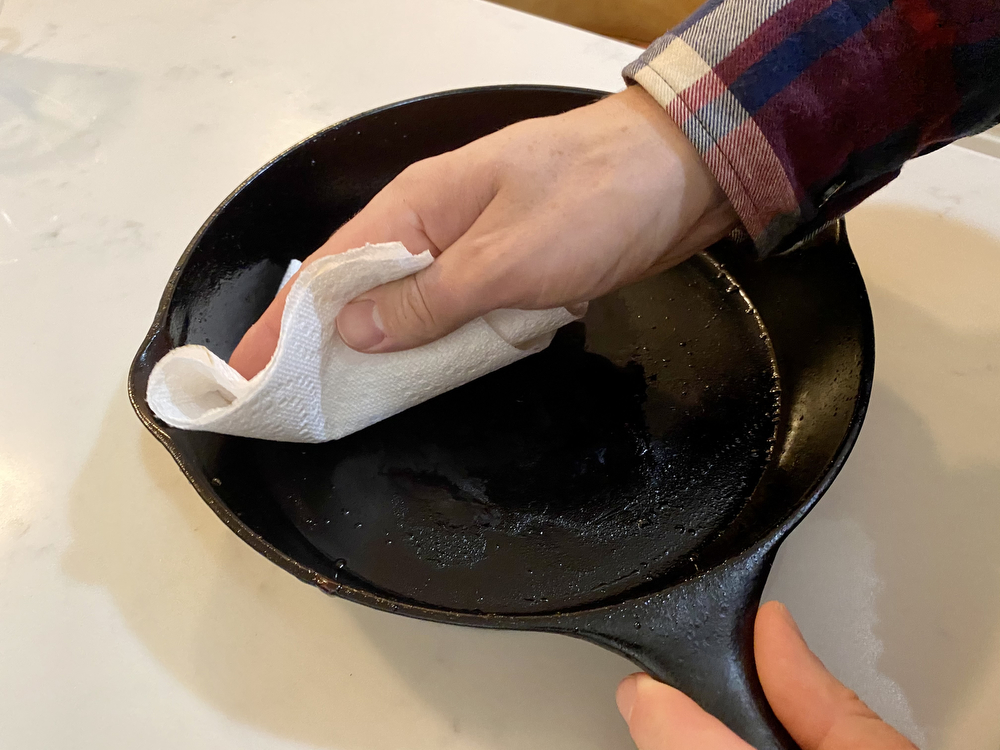 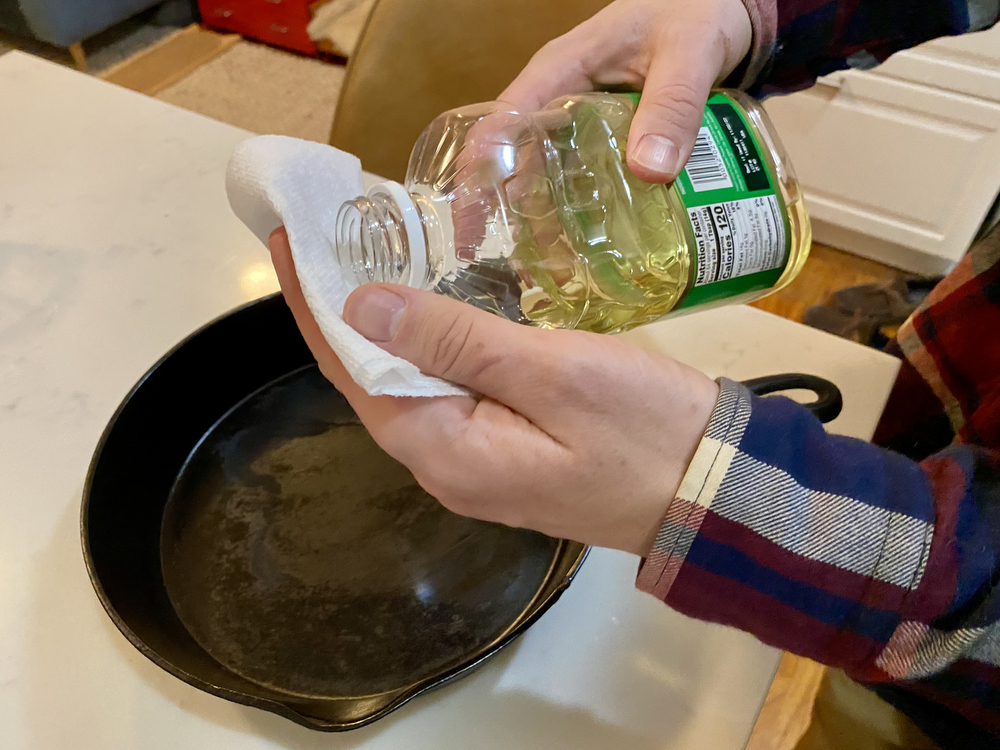 There we go! See how much nicer this freshly oiled skillet looks?

Ready for next time! 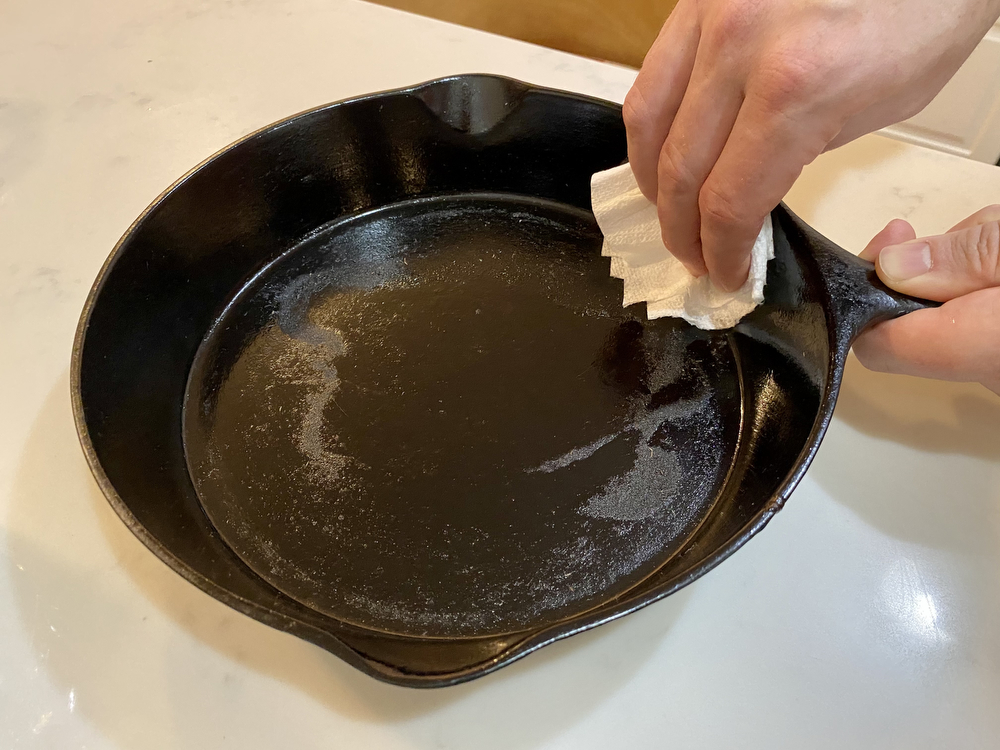 How to Restore Stainless Steel: A Step by Step Guide

How to Restore a Sticking Non-Stick Pan

We are a participant in the Amazon Services LLC Associates Program, an affiliate advertising program designed to provide a means for sites to earn advertising fees by advertising and linking to Amazon.com. As an Amazon Associate we earn from qualifying purchases.