Bacon is special, and that perfect strip of bacon - whether you like it chewy or crispy - may be as close to heaven as you can get in this lifetime. Of course, there is more than one way to cook bacon, but I’ve found that the traditional stovetop method is often the best, and certainly the most satisfying. Here's the best way that I've found for how to cook stovetop bacon!

Why cook bacon on the stovetop?

The stovetop method is so easy that a kid could do it. I actually remember working the bacon station as a kid whenever we made big, weekend breakfasts. It felt super important, and it was!

With a little know-how, some appropriate safety precautions and the right tools, making bacon on the stovetop really is pretty simple. And the truth is, it’s pretty hard to make bad bacon. 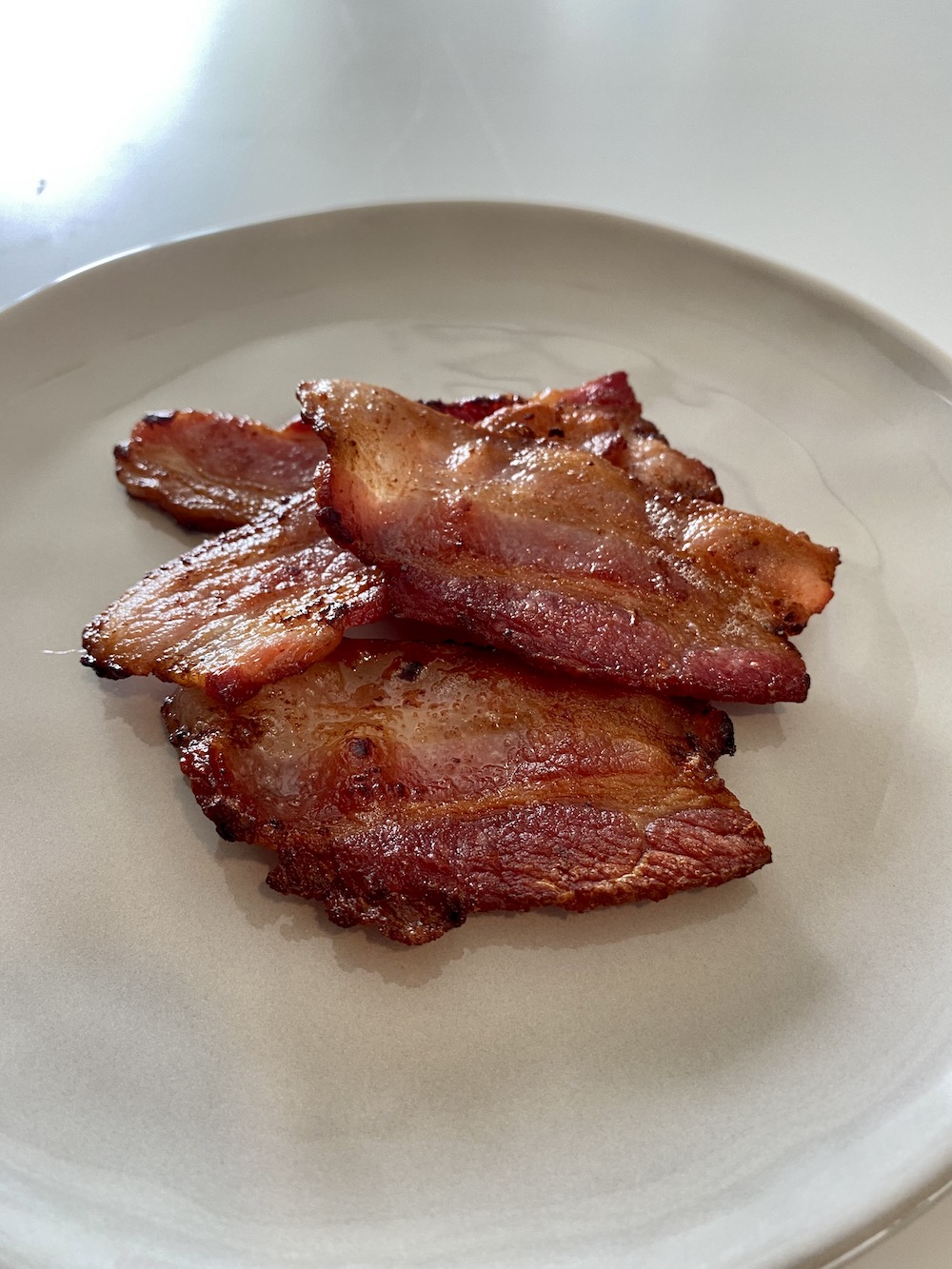 The best tools for cooking bacon on the stovetop 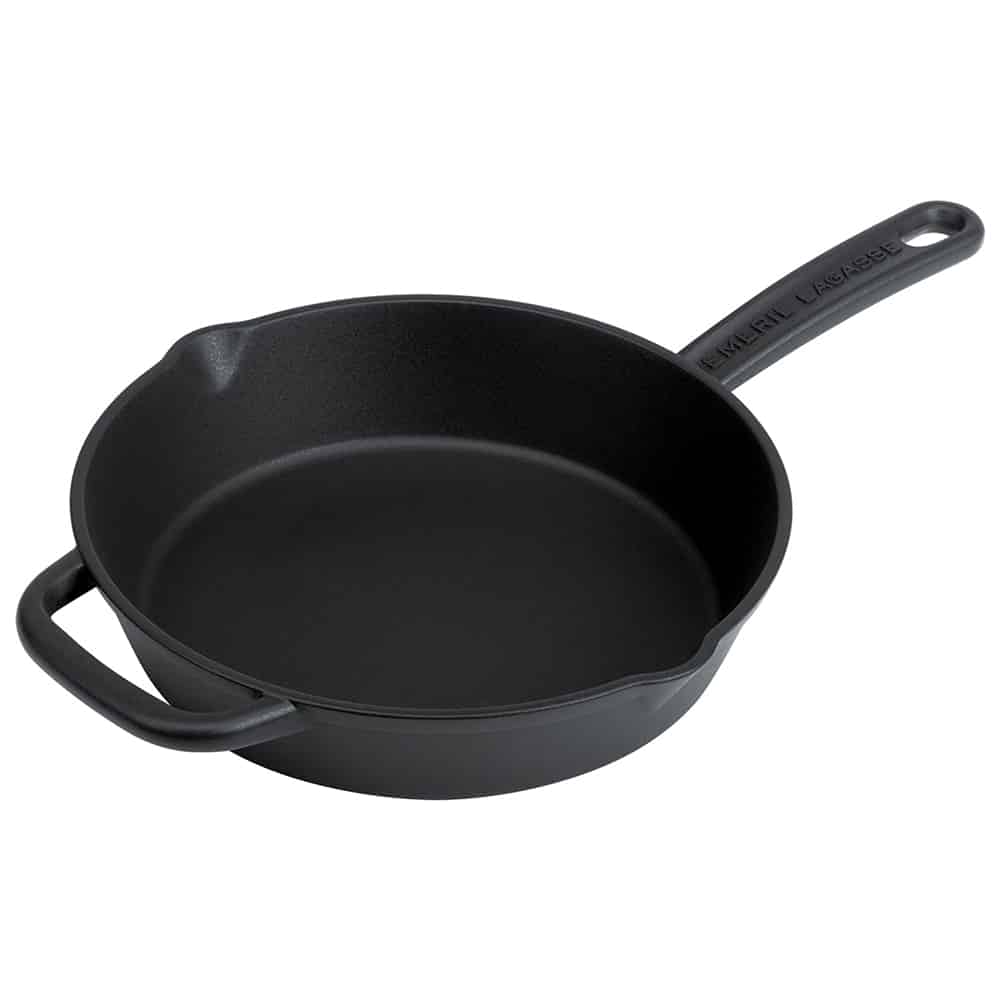 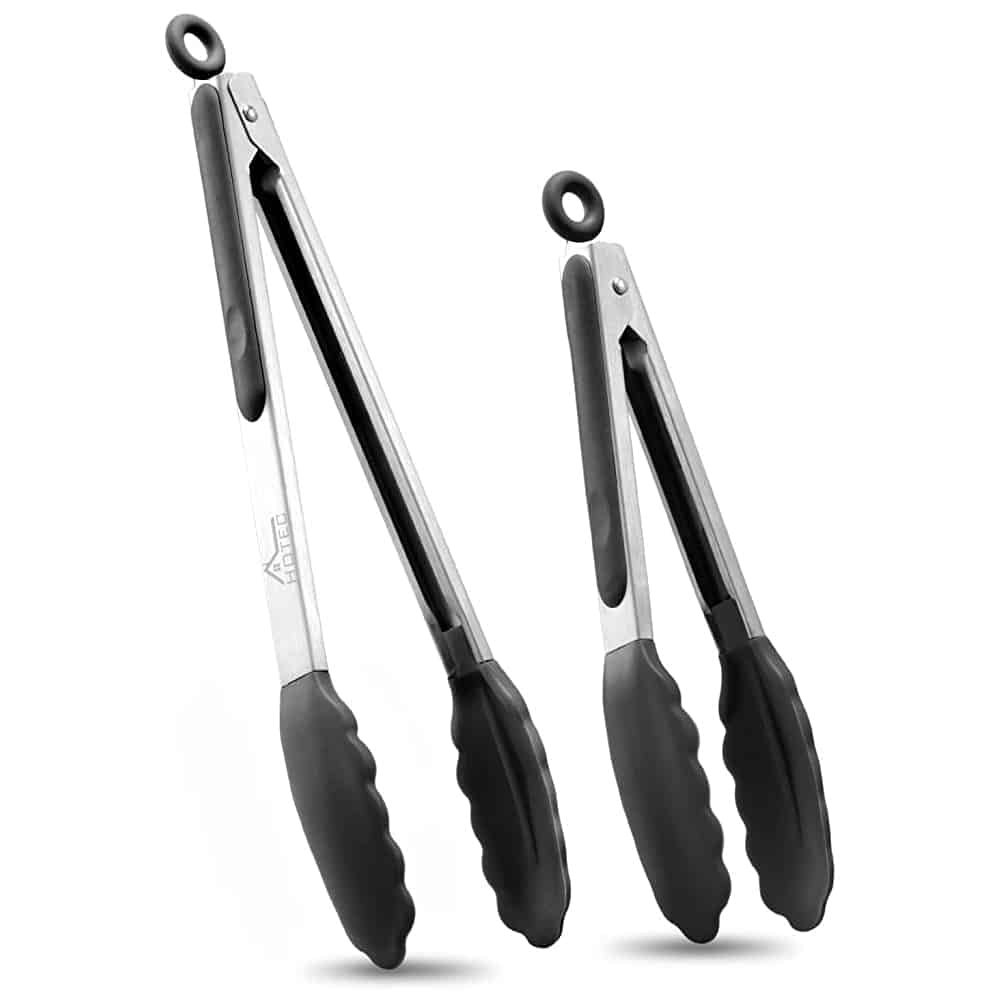 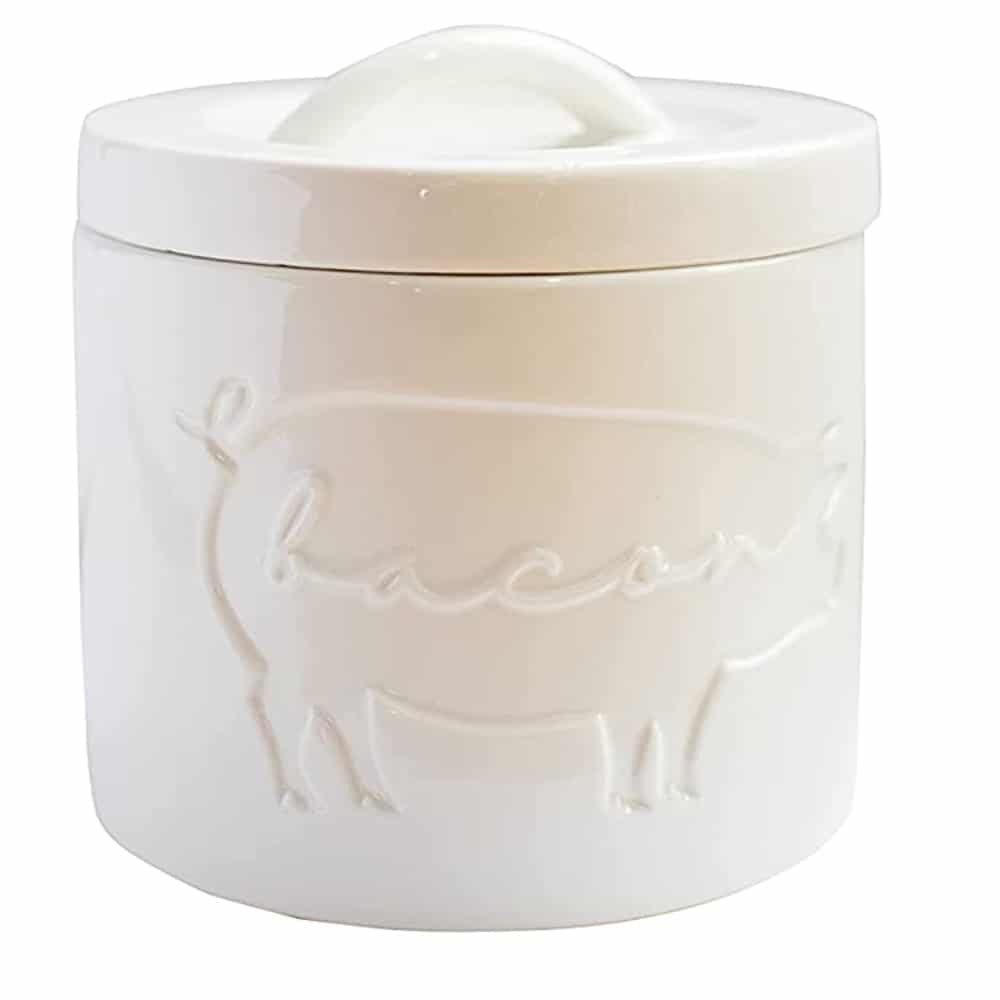 There are only a few items that you absolutely need to cook perfect stovetop bacon, and the most obvious of those items is the pan. Duh.

While nonstick and/or stainless steel pans will certainly do the job, cast iron really is the best choice for cooking perfect bacon. There are a few reasons for this.

First, cast iron retains heat like no other, and can be set to a relatively low, constant temperature that’s ideal for bacon. Second, the cast iron will actually absorb some of the bacon fat as you cook, reducing excess grease as you go.

Next, you’ll want to make sure you have a good pair of tongs. Now, you could use a fork if you’re in a pinch, but cooking bacon requires quite a bit of flipping, and this is really a job for tongs.

I prefer tongs with a soft edge, rather than straight stainless steel, because it’s gentler on my food, and won’t scratch my pans if I’m cooking with nonstick. Stainless steel tongs are fine for cast iron, but I wouldn’t use them on much else.

Finally, if you plan to save your bacon grease - and you should - then you’ll need a bacon grease container. This can be as simple as using an old soup can, but if you want to preserve your bacon grease for longer, and make sure it's purified of contaminants, I would definitely consider investing in a container designed specifically for bacon fat.

One of the reasons why bacon grease containers are so great is because they strain out bits of bacon that would otherwise go bad if left alone in the reserved oil. Let me show you what I’m talking about here. 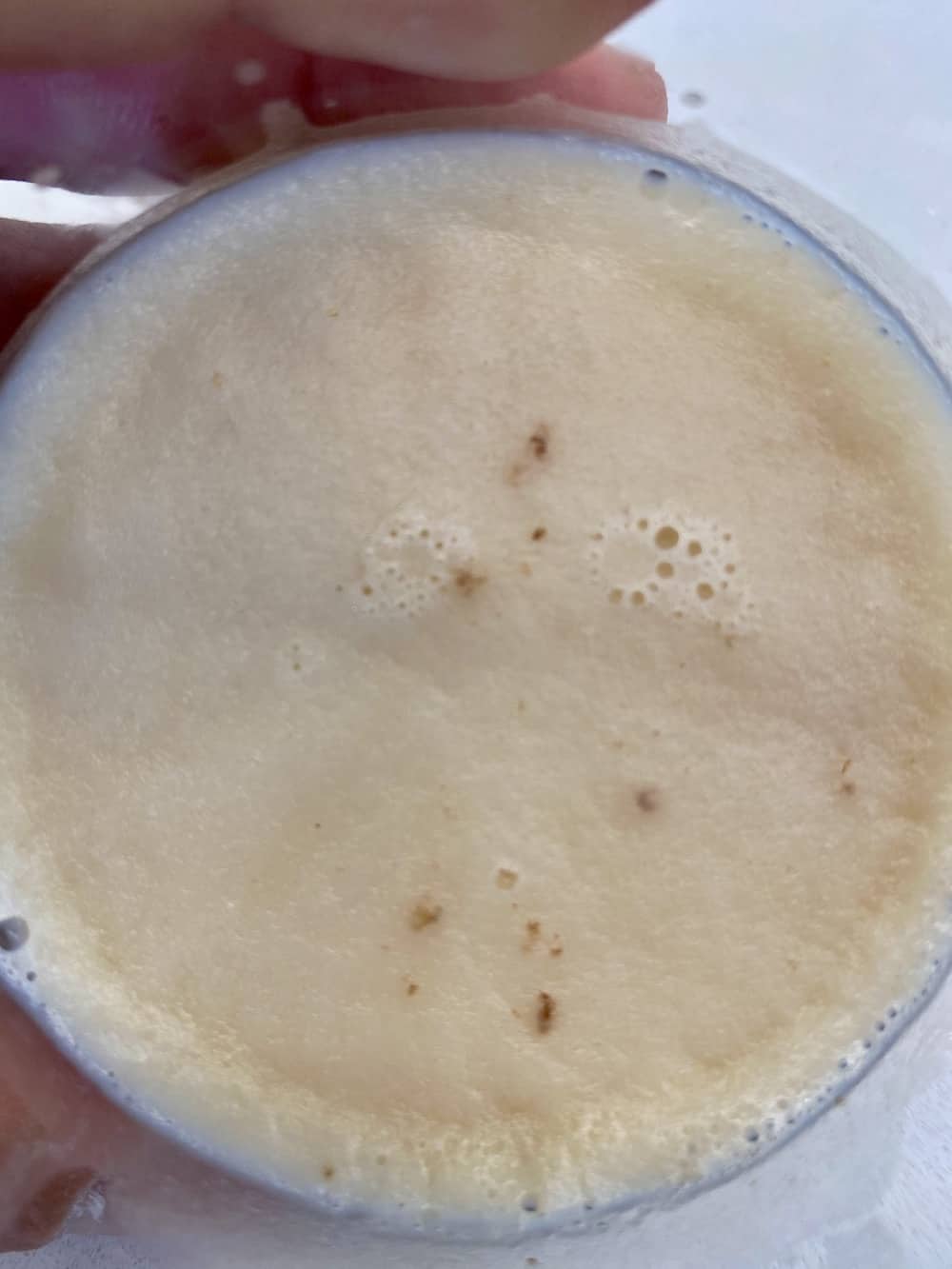 Here’s a little bacon grease that I reserved in a juice glass, just as an example of what bacon fat looks like when it’s cooled to room temperature. While most of the fat turns from transparent to opaque - this homogenous, cream colored substance is bacon fat in solid state - you’ll notice that there are brown speckles throughout.

These dark speckles are actually bits of food debris, and they’ll cause your bacon fat to go bad if not removed. This is especially risky if you leave your bacon grease on the counter, as many of us do. So again, the photograph above is simply an illustration of what you don’t want.

Remove those bits of food debris if you can, and the best way to do so is with a bacon grease container that has a fat strainer.

What temperature do you cook bacon at on the stovetop?

When cooking bacon on the stovetop, start low and slow. Place your bacon in a cold pan and slowly raise the temperature to low to medium heat, flipping with relative consistency to prevent burning.

If you preheat your pan and put the bacon in when it’s hot, the fat won’t render properly, and you also risk burning your bacon. I know this is counter-intuitive, especially since we always talk about preheating, but trust me on this one.

What is the best way to cook bacon on the stovetop?

The best way to cook bacon on the stovetop is in a cast iron skillet, on low to medium heat, flipping consistently. This bears repeating here because it really is contrary to many cooking methods.

Usually, we talk about preheating the pan and letting food sit undisturbed. But bacon is a different animal - start it in a cold pan to let the fat render correctly, and flip it more than you think you should to avoid burning.

Come to think of it, this is probably why my parents “put me in charge” of the bacon as a kid. The pan wasn’t super hot, and I’m pretty sure that I flipped that bacon obsessively.

How to reduce grease splatter while cooking bacon

The best way to reduce splatter while cooking bacon is with a splatter screen. Splatter screens are made from ultra fine mesh, and prevent 99% of hot oil splash while still allowing airflow.

Splatter screens are pretty simple instruments, and very easy to use. They come in a variety of sizes, but you’ll want to make sure you select a screen that is larger than your pan, so that it can rest comfortably on top.

Simply rest the guard on top of the pan while frying bacon, lifting momentarily only when you need to flip. When you’re finished, hand wash the screen with a gentle detergent and towel it dry.

How to make a DIY splatter screen

First, you could simply cover your pan with a lid, as I’m doing below. Stainless steel and tempered glass lids certainly cut down on splatter, but they have two significant drawbacks. First, unless you’re using glass, you won’t be able to see the bacon as it cooks. 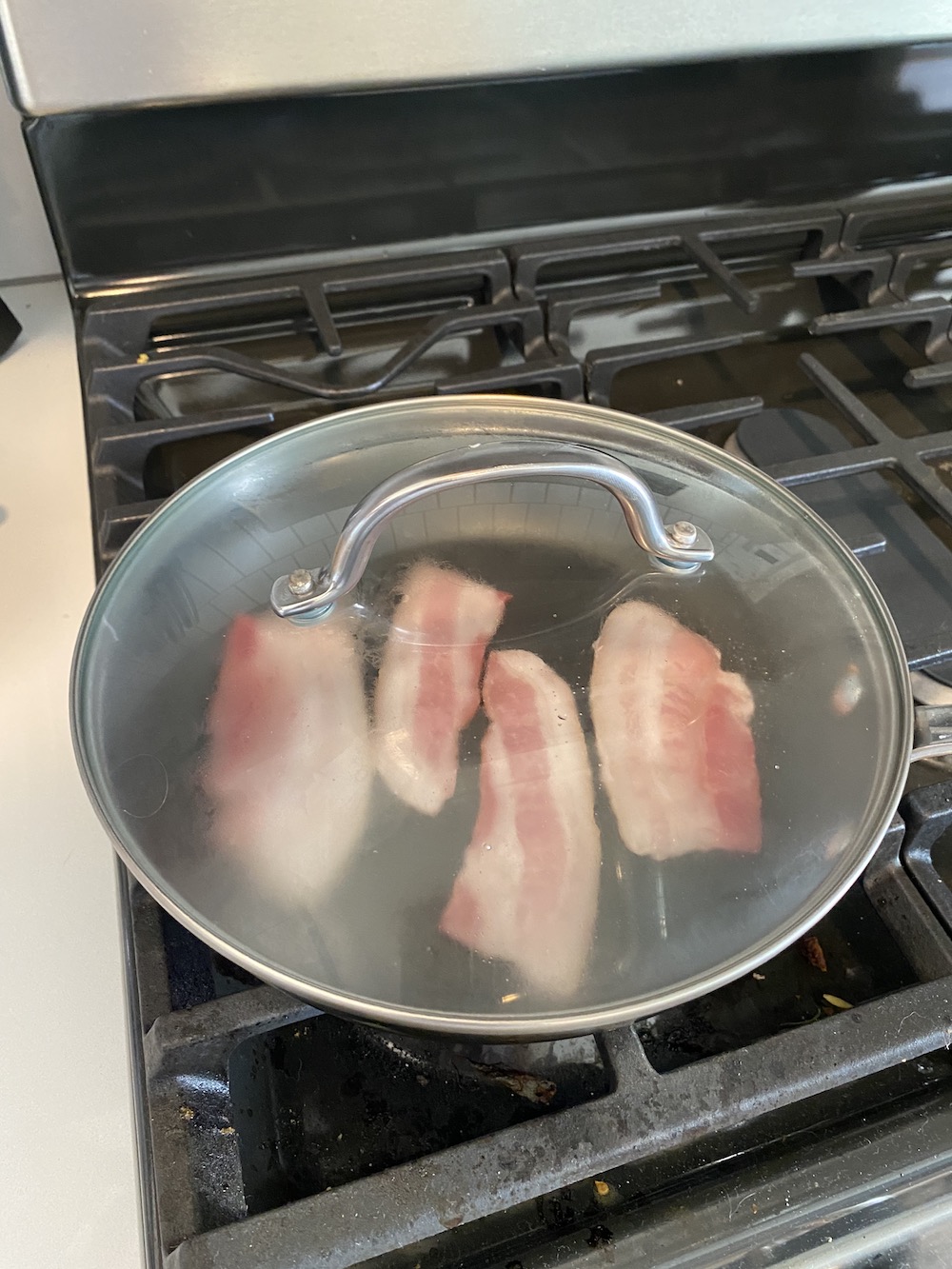 Since bacon cooks so quickly and really depends on perfect timing, keeping an eye on your bacon is super important. A lid will obviously impede this.

But more importantly, lids trap steam, something you want to limit when crisping up your bacon, or crisping up anything else for that matter. Steam = soft, and we don’t want that.

So rather than using an actual lid, and in the absence of a splatter screen, I usually just use a simple piece of cardboard, cut to size.

These cardboard splatter screens are actually kind of perfect, since they leave an opening on the side for steam to escape, they effectively block grease splatter, and they actually absorb fat, reducing the amount of bacon grease left in the pan.

And most importantly, they’re free! 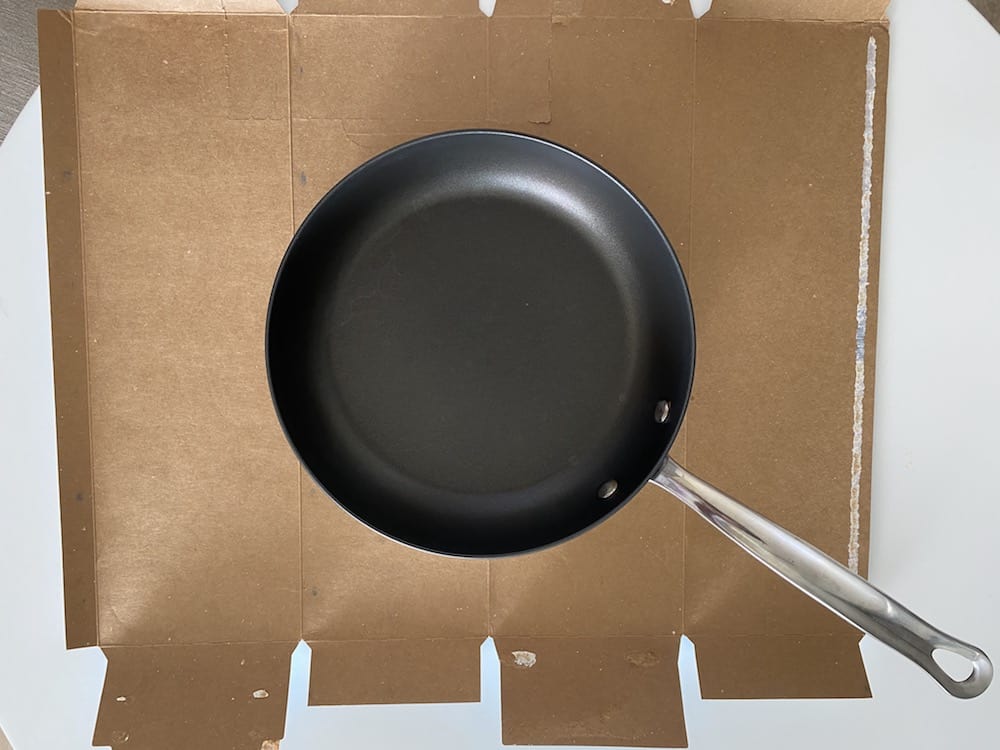 The first thing you’ll want to find is a suitable piece of cardboard. I’m using a broken down box of seltzer, but Amazon boxes are also perfectly fine. Lay the cardboard out flat, and place your pan on top of the cardboard so that you can roughly trace its shape, as I’ve done above.

I like to include a small lip on one side, resulting in a tear shape - this lip serves as a helpful handle. And remember, you want to make sure your cardboard “screen” is larger in circumference than the pan. This isn’t a science though, go ahead and eyeball when making your cut. 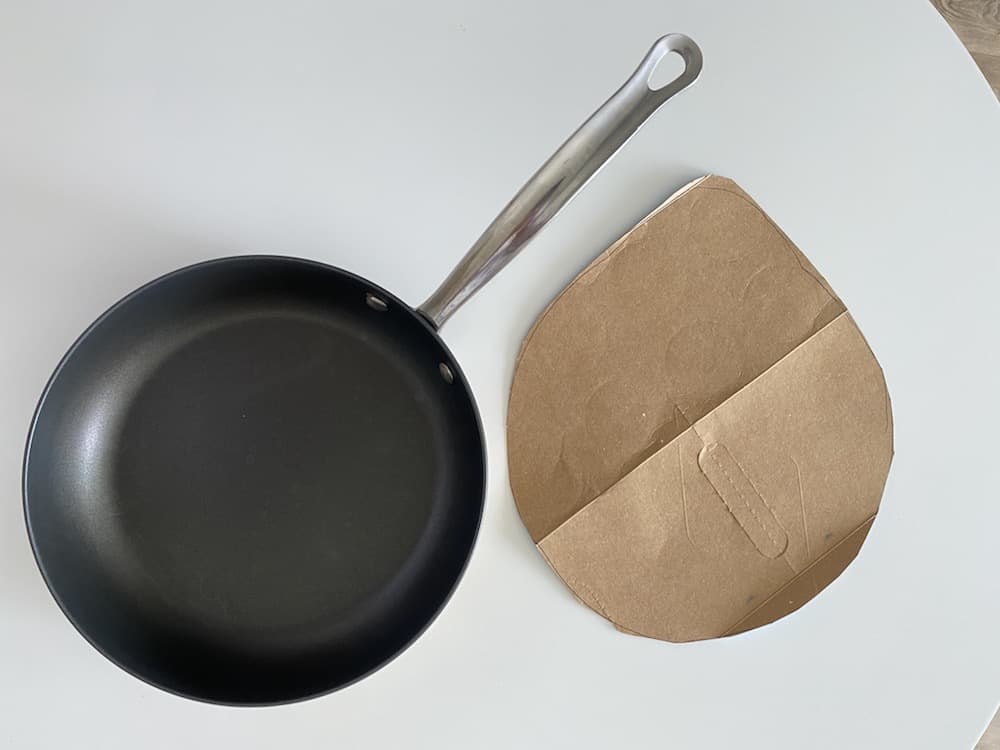 You can see here that I’ve placed the cardboard screen on my pan at a slight angle. It’s definitely not perfect, but that imperfection is actually critical, since we don’t want the cardboard to create a seal with the pan underneath. Remember, we want to trap grease splatter, but not steam. 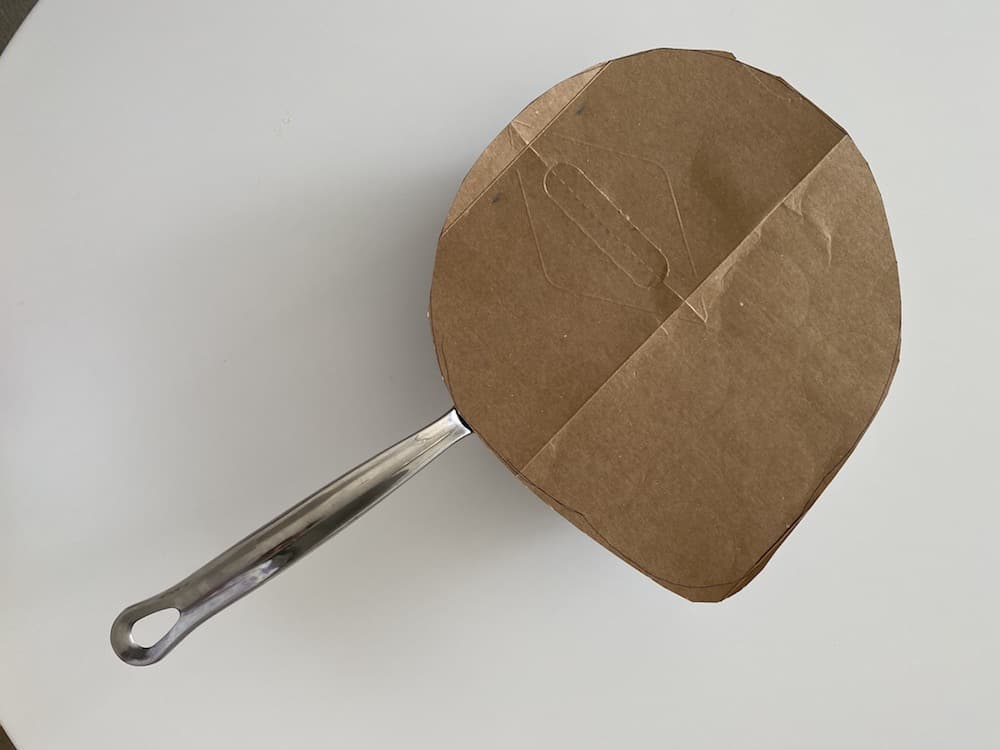 And that’s pretty much it! DIY splatter screens are fast and free, though it should be obvious that this is a single use technique. The cardboard gets pretty nasty by the time you’re finished cooking your bacon, and there’s no real way to clean it. But again, it’s cardboard, which is in seemingly infinite supply in my home - so go nuts!

Can you cook bacon from frozen?

However, when it comes to cooking bacon from frozen, the real issue is separating frozen strips from the rest of the pack. If you have a pack of bacon in the freezer, those strips are going to be glued to one another and you’ll end up pulling your hair out trying to get them apart.

So, if you have a pack of frozen bacon that you want to cook relatively soon, the best thing to do is soak it in water, at least for long enough that the strips of bacon peel away easily. Submerge the frozen bacon in water, and within a few minutes you should be able to separate individual strips. Simply pat those strips dry with a paper towel, and then cook the bacon as you normally would.

Can you cook bacon without oil?

You can and should cook bacon without oil. Bacon is nearly 50 percent fat to begin with, and as it heats up the fat renders, converting solids into the perfect oil in which to cook. Basically, bacon cooks in itself.

So, the best way to cook bacon is in a dry pan, without oil. Adding oil is unnecessary, and just creates even more splatter and a bigger mess.

Cooking bacon on the stovetop - step by step

Here's how to cook stovetop bacon: 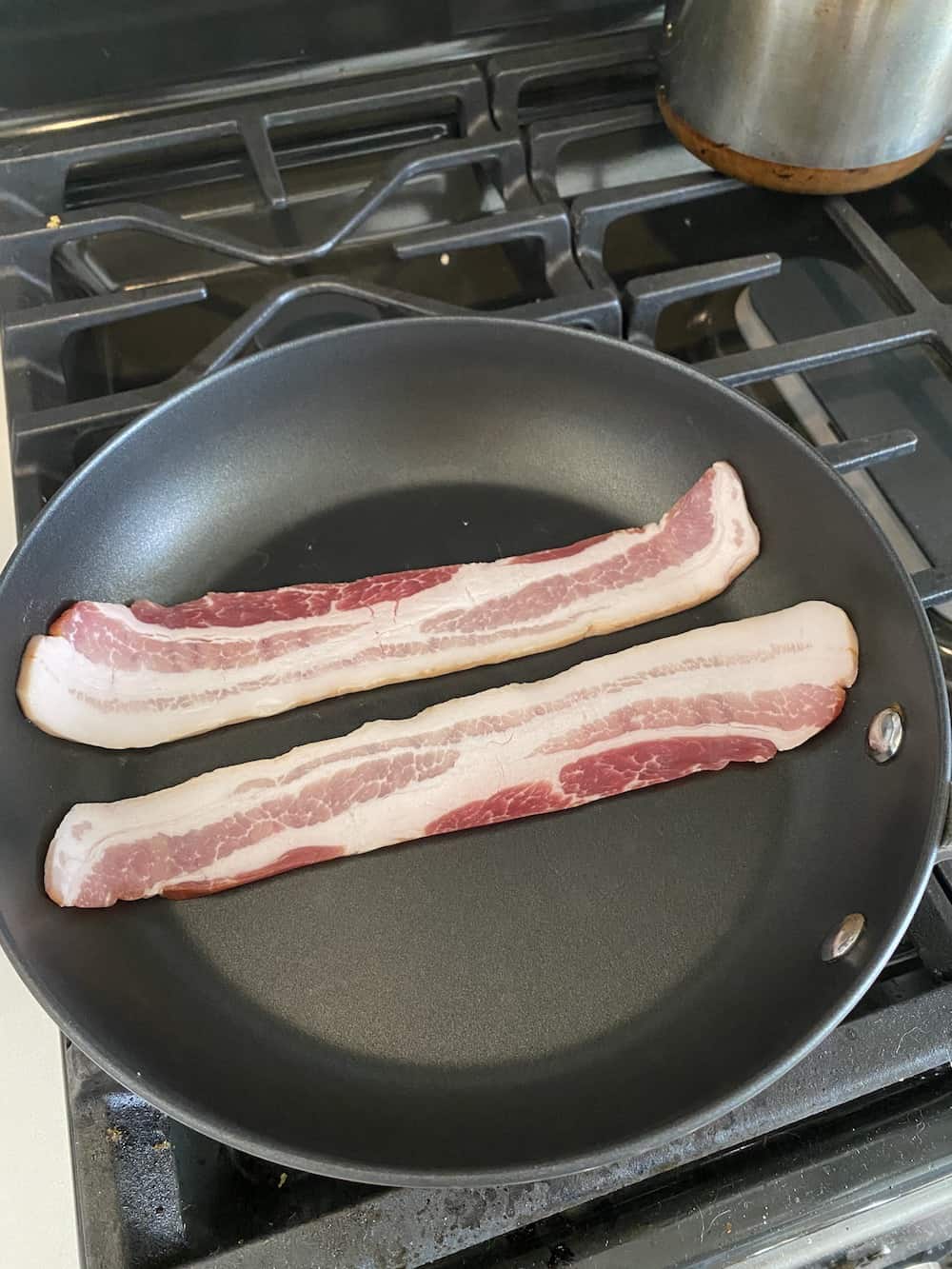 As you can see above, the bacon is juuuuust too big for the pan I’m using. It wouldn’t be the end of the world if I left the bacon as is, but when the bacon curls up the edges of the bacon you run the risk of cooking unevenly.

I like to use a pair of kitchen shears for this, but you can also use a knife. Just make sure your knife is sharp though, since the fat content in raw bacon can make it pretty tough to get through. 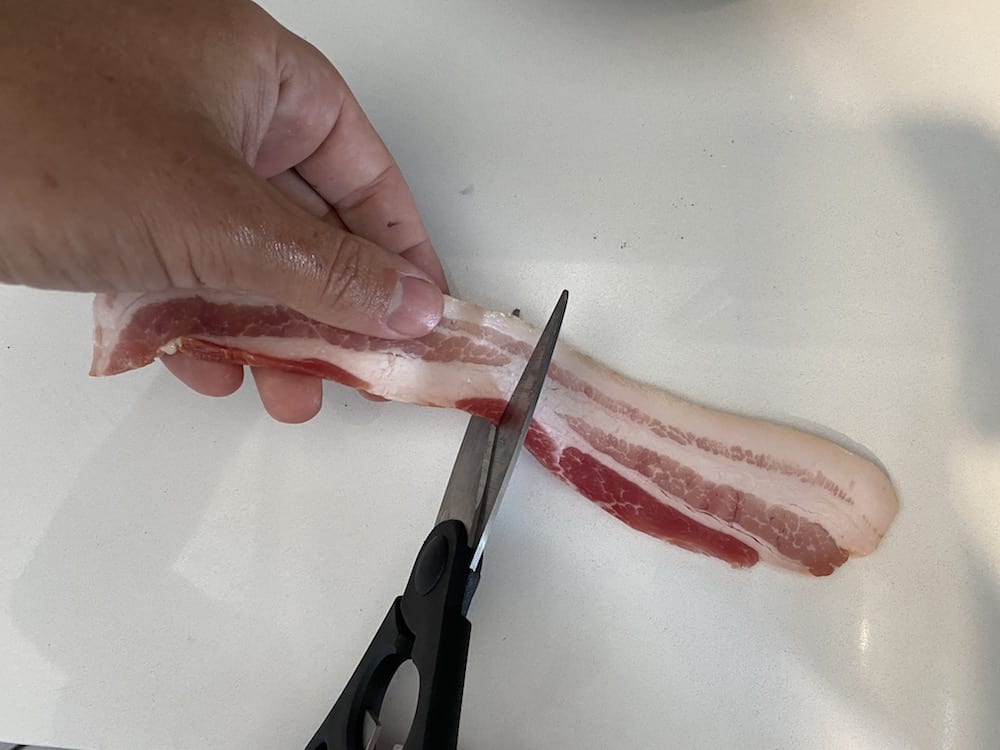 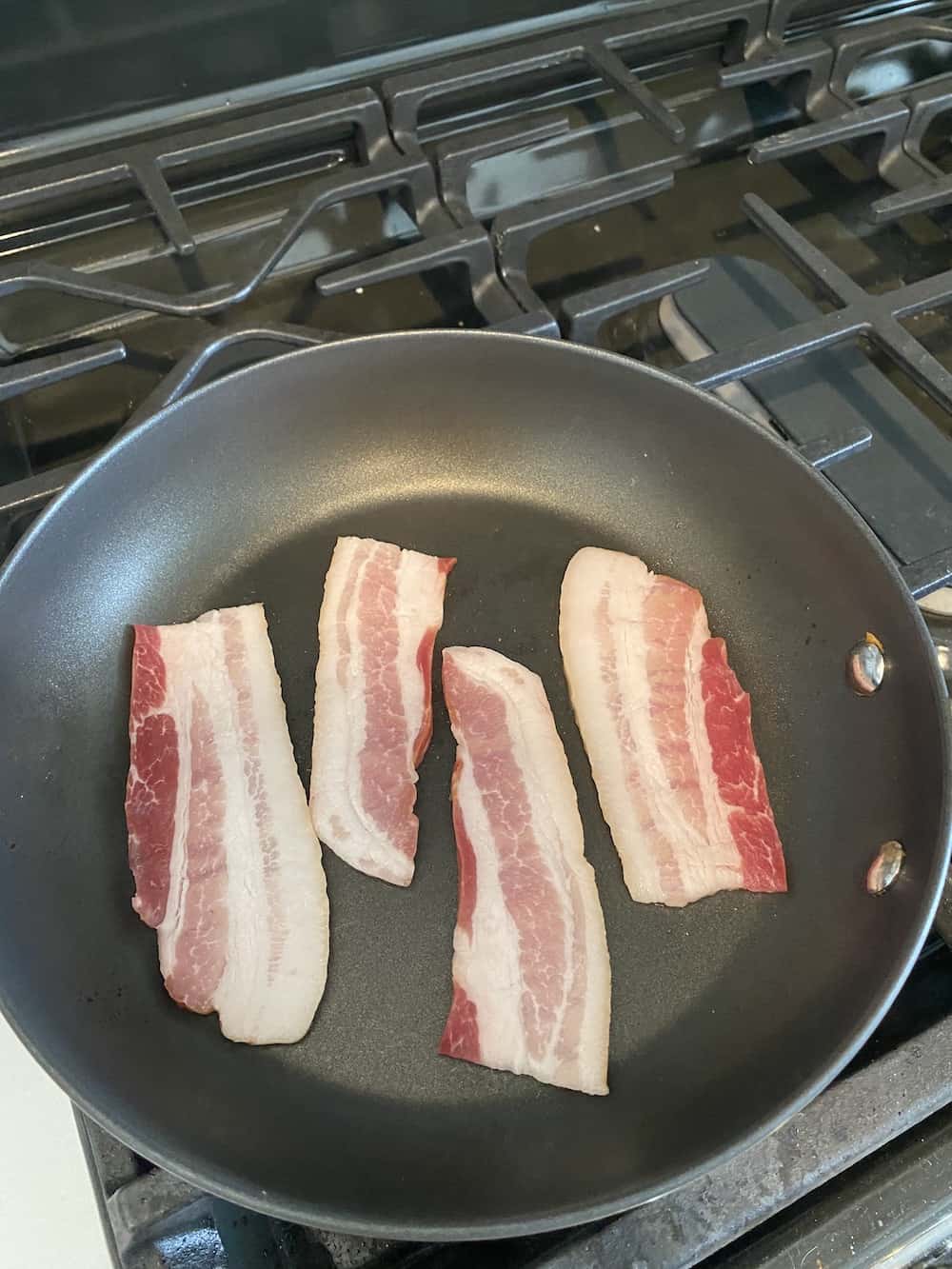 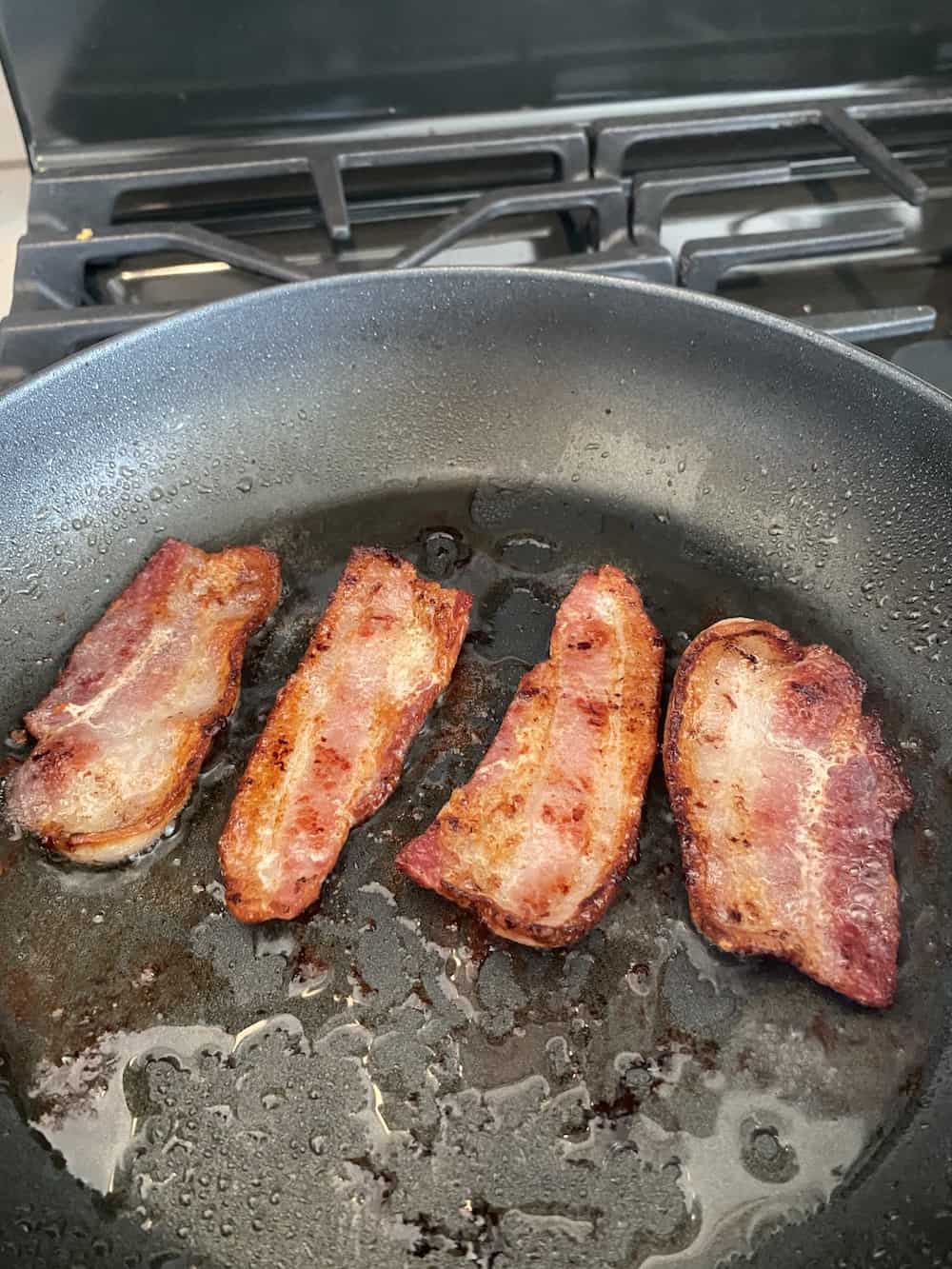 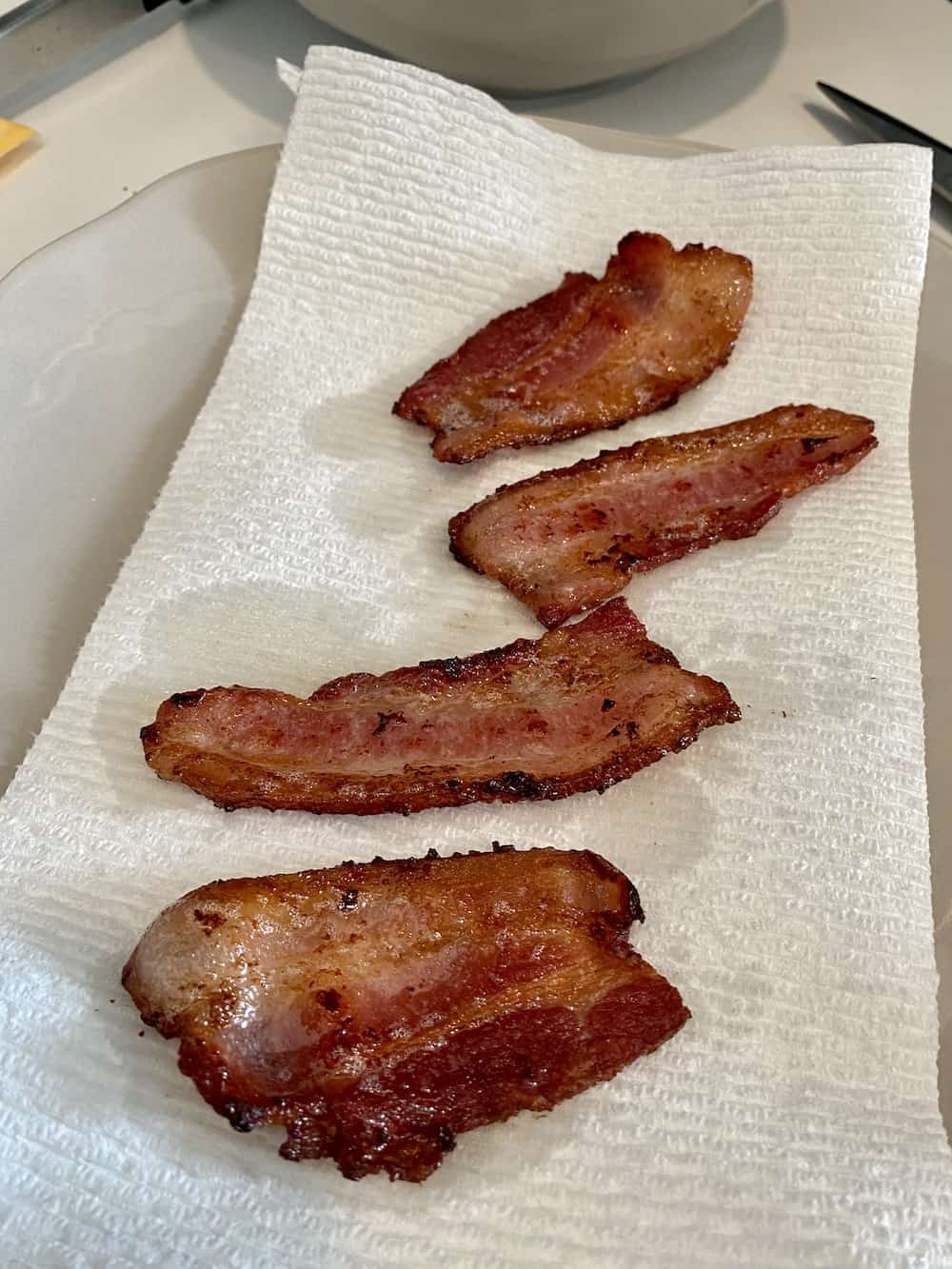 Cleaning up will look different depending on what pan you’ve used to cook your bacon. But regardless of whether you’ve used cast iron, nonstick or stainless steel, you’ll want to start by decanting your drippings into a bacon grease container and then wiping away excess fat with some paper towels.

Next, if you’re like me and prefer cooking on cast iron, you can run the skillet under hot water to loosen cooked-on food bits, or use a scrub brush for more stubborn debris. Cleaning cast iron is all about not overdoing it though, since you want to preserve that natural seasoning. Feel free to read more about cleaning and maintaining vintage cast iron here.

If, on the other hand, you’re using nonstick or stainless steel to cook your bacon, you can feel free to scrub those bits of food off with a sponge and a gentle dish soap. A great tip for making clean up easier is to either run the pan under hot water - as I’ve suggested above - or even fill the pan up halfway with water and return it to the stove, over high heat.

Let the water boil and as it does, those bits of debris will release like magic. When you’re finished, wipe your pan dry with a clean towel.

How to Restore Stainless Steel: A Step by Step Guide

How to Restore a Sticking Non-Stick Pan

We are a participant in the Amazon Services LLC Associates Program, an affiliate advertising program designed to provide a means for sites to earn advertising fees by advertising and linking to Amazon.com. As an Amazon Associate we earn from qualifying purchases.